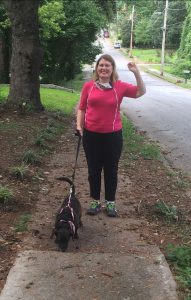 In Ecclesiastes 3:1-2 it says, “To everything there is a season, and a time to every purpose under the heaven.” There was no time in my history that I found this Bible verse to ring truer than during this time of the COVID 19 pandemic. You might think that COVID could have taken my joys of life from me, but rather, the opposite happened, despite facing the virus at full-fledged capacity. Instead, I experienced God at work in my life.

Going back some years ago, I had a yearning to begin a new habit, one that could enhance my health. My goal was to increase my overall physical activity. I always had a reason as to why I put exercising on hold. My excuses ranged from “I don’t have enough time” to “I am too tired to think about exercising, much less doing anything about it” to “the weather is uncooperative.” So, the story became a familiar one for me in not overcoming my perceived obstacles.

When I retired in November of 2019, my hopes were bolstered that I would finally be able to make lifestyle changes for which I had been waiting such a long time. But, by March 2020, to my total dismay, I had not made one measly lifestyle change! What would ever be different?

It was at this precise time that I received an email from Karen Webster, who I had known through contacts from Columbia Theological Seminary, asking if I would be interested in taking an online course called Health and Wholeness that she had developed to improve the health of busy seminarians. I knew of Karen’s non-profit organization, Healthy Seminarians-Healthy Church, which she and her husband had established. Initially, I debated whether this course would be worth my time. After all, I just retired from being a clinician in the medical field and had received education several times over on “mindfulness.” After thinking about the possible benefit this course might provide, I decided, “why not” – after all, it would be good to be part of a group during a time in quarantine.

My first encounter with Karen’s course was a surprise for me; it was not a totally didactic course as I had expected. It was a course that included a significant amount of discussion and introspection. I soon realized that all of us taking this course were frustrated about making permanent lifestyle changes. As we shared our stories, I felt a fellowship growing among us.

Karen presented us assignments between sessions. The questions posed in our assignments were broad in nature, allowing us to move in our own direction. The Bible verses offered, the readings and references noted, the prayers shared, the discussions we had, and the freedom to laugh began to take hold by seemingly releasing me from some of my old thoughts. Might it be that a change in me could be happening?

It was an early evening with clear weather as I looked outside. I asked our dog, “Would you like to go on a walk?” As I think back, I do not remember any response one way or another from her. When I put on her leash and headed to the front door, she became excited. What fun, I thought, to have a partner for walks!

It has been about four months since the beginning of Karen’s course, and I can say without reservation that I HAVE developed a new habit, one that I had been hoping to cultivate for an exceedingly long time. Nearly every day, my dog and I set out for a walk around the neighborhood. With each walk, I expand my boundaries, increasing the benefit to my health. Now, when I say the word “walk,” my dog knows the meaning.

So, as I finish writing my testimony in tribute to this course, I listen to the YouTube video of Turn, Turn, Turn by the Byrds. From now on, when I hear these lyrics taken from Ecclesiastes 3:1-2, it will give me pause to remember this special time in my life.