September 2020 – As with many of you, this past summer continued, for me, to be nothing at all like what I had expected or envisioned at the beginning of 2020… trips and plans were canceled and interactions with others were restricted to online gatherings. While I am thankful for the virtual option, it does not, and nor should it, compare with enjoying in-person community with others! 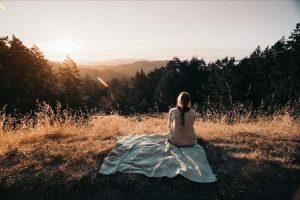 One of my biggest disappointments involved the 124th annual Boston Marathon, which I was supposed to have run on April 14, 2020. I found out that I had qualified for the race in September 2019 (by only 13 seconds!) and started to train in earnest at the beginning of January 2020. By mid-March, I was well on track to hit the personal goals I had set for myself. At that point, the reality of COVID caused the world to come to a screeching halt, and all of my “hard work” quickly came to an end.

Yes, the Boston Marathon was quickly rescheduled for September 14th , meaning that, in theory, I would restart my training at the beginning of June. However, by mid-spring, I knew in my heart that this was not going to happen. I was not going to be able to run in one of the world’s premier races, and who knew if I would ever be able to qualify again? Yes, I was aware that not being able to participate in the Boston Marathon was quite minor in comparison to the number of people who were dying (and would die), as well as the devastating impact COVID was having, and would continue to have, on the world (physically, mentally, emotionally, spiritually, financially, and more). Thus, when the September 14th inperson race date was officially cancelled at the end of May 2020 and replaced by a “virtual” race, I thought I was fairly at peace with what had happened. “Really, it is no big deal; it’s just a race,” I told myself and others.

And yet, the moment the registration for the “virtual” race became an option, I quickly signed up because, truth be told, I discovered that my pride was at stake! If I ran the 26.2 miles (anywhere I wanted) between September 5-14, 2020, I would complete something to which I had committed. Plus, I would receive the t-shirt and racing bib I would have received if I had completed the “real” race back in April. Yes, it is amazing what one will do for a tshirt. What is even more amazing is the lesson I learned from God in the process!

Now, one might think that training for a “virtual” race would be easier than training for a “real” in-person race, because the pressure of racing against others would no longer be a factor. I just needed to complete the race. However, what I discovered several weeks into training for the virtual race is that, when I thought that I didn’t have the accountability to anybody or anything, not only did my training suffer, but this attitude generally impacted other aspects of my life. For example, cutting corners by running fewer miles, getting less sleep, or not stretching as much was mirrored in putting off calling a friend, not cleaning the house as thoroughly, or neglecting to weed the garden. I found that the sense of hopelessness and anger COVID had instilled in my training was like a fog, seeping into every other aspect of my life.

About a month ago, on the day I set out to do my longest training run for the race, I left the house mad… mad because the weather was miserably hot and humid (after all, it was August in Georgia!), mad when I ran by others because they had no idea how far I had to run or why I was putting myself through all of this, mad at myself for being mad…until I passed by another runner who simply smiled and said, “You’ve got this!”

At that very moment, my attitude noticeably changed, from one of anger and frustration to a sense of calming peace. In fact, I found God’s small, quiet voice saying to me, “Karen, you know that what you do matters to you, to others, and to me. Even when you think no one is watching, you know that I am with you.” That led me to think about what kind of steward I was being, with my body, soul, time, attitude, money, and more, during this continued period of disruption, a time when we yearn for just an inkling of normalcy in our lives. By the time I got back from my 20-mile run, I was physically exhausted, but emotionally and spiritually renewed. September starts the beginning of the new school year (in whatever form that is taking in your area!). Even though I have been out of school for a while, I find this season still brings with it a sense of expectation and beginning, and invites me to take stock and reflect.

In that spirit, I want to challenge us all to consider:

• What are some things we are currently doing “in secret” that are not glorifying to God, neighbor, or self?

• What are some ways that we can love God more fully, neighbor more fully, and self more fully – not only bringing honor and glory to God and without drawing attention to ourselves, but also instilling greater joy and peace in our own lives?

As my fellow runner told me on that hot August day, “You’ve got this!” Indeed, especially in the face of ongoing challenges, let’s take these words to heart. You’ve got this. I’ve got this. By God’s grace, together, we’ve all got this.